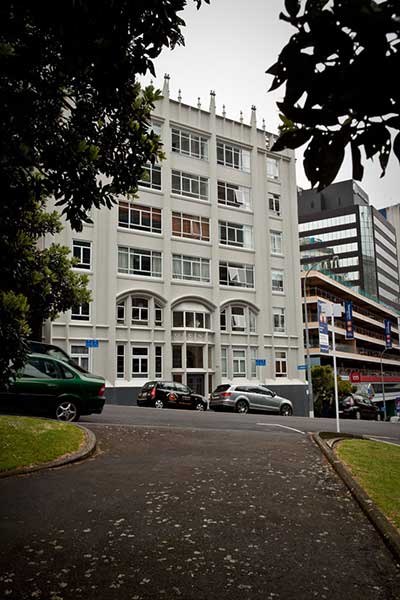 This apartment building was designed by architects Thomas Coulthard Mullions and Sholto Smith from the firm McDonald, Mullions & Smith Architects and erected by builder Noel Cole in 1923. The neo-Gothic or Gothic revival style building is of reinforced concrete construction designed by civil engineer Joseph Stanleigh McAven. It is entered as a treasured historic place on the Heritage New Zealand List (formerly New Zealand Historic Places Trust) and recognised as a place of “historical or cultural significance or value.”

The elegant lobby, featuring marble, carpet, wood and leaded glass, reminds visitors of a bygone era. All 24 of the generously-sized flats have two bedrooms and represent an interesting mix of interiors after more than 90 years of occupancy and changes.

In the building, there are six floors each with four flats.  In addition, there is a 25th flat which in previous years used to be occupied by a live-in manager, but is now rented out.  Behind the building, accessed from Bankside Street, there are seven carparks which are rented out to flat owners.  Income from Flat 25 and the carparks helps with the operational costs of the building.  The roof is a shared space where residents can hang their washing, and enjoy the sunshine and views, or have social gatherings.  In the future, we hope to have a roof top garden.  In the basement there is shared, limited space for bicycles and seasonal storage.

Unlike unit title buildings, the apartments themselves are not owned individually by the owners, nor do the apartments have separate titles. Instead, the land and building is owned by a company called Shortland Flats Limited.  Each of its twenty-four shareholders has an exclusive right of occupancy to a flat in the building. Shareholders occupy almost all the flats with very few tenanted flats. Some residents have called Shortland Flats home for more than twenty years.

This section contains general information about the building.  If you are considering buying one of the apartments, the information contained here will be of use to you, especially the section regarding the flat-owning company structure.  You can also request from the vendor's agent more detailed information.